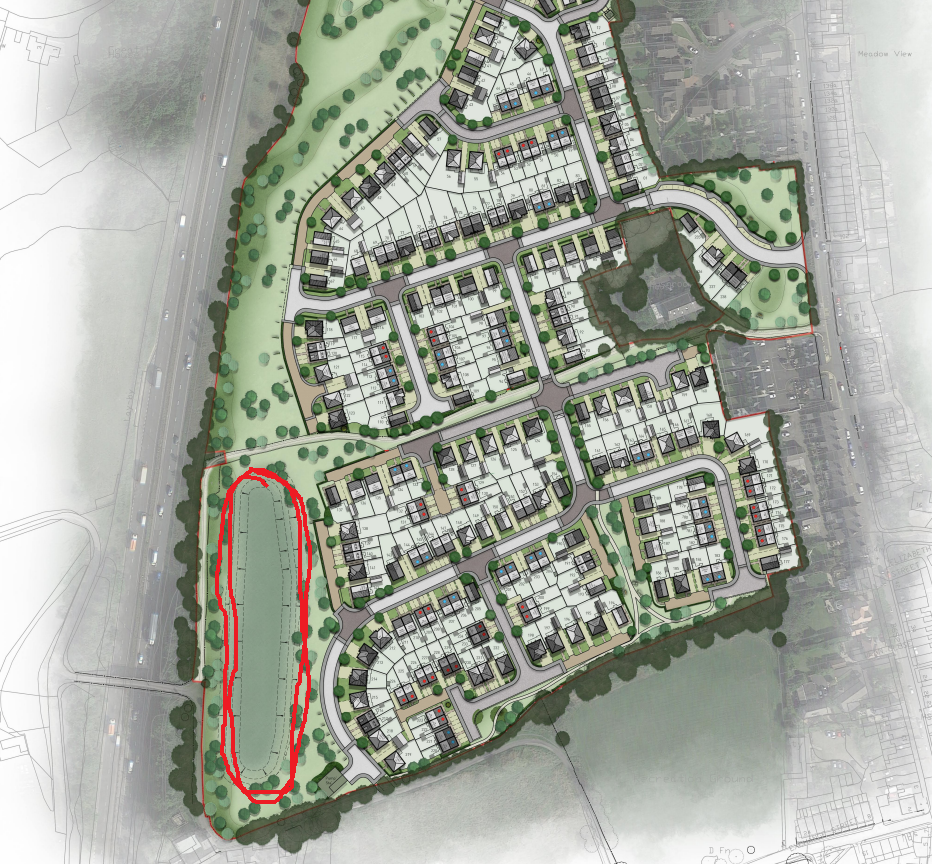 We’ve been considering the problems facing Taylor Wimpey or other developers who plan to build on the land proposed by Rossendale Borough Council for housing developments in Edenfield. We understand that landslips were an issue when the A56 (Edenfield bypass) was constructed, some of the “hillocks” in the land where building is proposed are “spoil” from the A56 construction and may be unstable and part of the embankment to the North of Edenfield has been shored up and a 50mph speed limit is in place.

All the above leads us to believe that this poorly drained land may be unsuitable for building. We know that it is not possible to build drains under the bypass and that the sewage/waster water from Edenfield is currently pumped uphill to the sewers under Market Street, rather than flowing downhill to the Irwell Vale water treatment works.

Brief walk over Taylor Wimpey’s proposed site for 238 houses in #Edenfield. Their solution to the drainage issue is a huge pond/soakaway near to the A56 embankment. We wonder how many thousand tonnes or water and mud the embankment can support? @HighwaysNWEST your thoughts? pic.twitter.com/P3Ga7V8vWS

In the above tweet we shared a video of a brief walk over the field where Taylor Wimpey plan to build 238 houses. Building in Edenfield is likely to increase water run-off and the risk of flooding down the valley in Strongstry, Chatterton and Irwell Vale.

To reduce the risk of “run-off” causing flooding, Taylor Wimpey’s plan is to use something called a “SuDS“. This is a Sustainable Drainage System, which all sounds great…. A SuDS is a way of managing and treating surface water run-off in a natural, environmentally friendly way. It mimics natural processes that occur in the environment to manage and treat surface water, rather than relying on traditional “hard” engineering solutions such as concrete drainage channels and pipes.

In the plans submitted by Taylor Wimpey a SuDS will be used to store run-off water. This will be at the lower end of their proposed site close to the A56 embankment and bridge over the A56 bypass.

The only problem with this, is that Edenfield Community Forum has a letter from Highways England, written in 2020 in response to our concerns about council’s plans to release green belt land for development. We raised this as a concern when the council first hatched their plans to build 400+ homes in Edenfield. Despite our concerns, and those of Highways England, the council has decided to release the land from green belt and encourage development.

The above email from Highways England is lengthy, but it is important to note that in the final paragraph, Warren Hilton, Assistant Spatial Planner at Highways England wrote to say that, “culvert and drainage design associated with the development proposals would need to be considered, along with the need to avoid the used of SUDS within the site, due to the risk of affecting the stability of A56 slopes”. He went on to say that “In our view, the ground material within the site above and along the A56 boundary is not suitable for the use of SUDS, and also likely across the site in general.”

Surely Rossendale Council has to see sense and reject this proposed development!