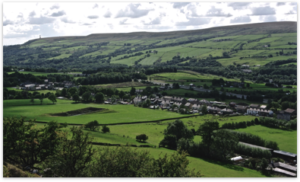 Rossendale Borough Council have published their revised draft Local Plan and you have until the end of the final consultation period on 5th October to make your voice heard before the Local Plan is submitted to the Secretary of State (Planning Inspectorate) for examination by an independent Planning Inspector. The 800+ objections made in 2017 to the previous draft Local Plan ARE NOT carried forward as objections to the revised Plan. The Plan can be viewed online at https://www.rossendale.gov.uk/localplan or at local libraries and the One Stop Shop at Futures Park, Bacup.

Despite the strength of local feeling with over 800 objections made last year to the proposals to remove land from the Green Belt in Edenfield, the revised Plan still proposes the release of 45 acres of Green Belt land and the building of 456 houses in the village including 400 on the Green Belt land in the area west of Market Street. This will virtually double the built up area of the village and increase the population by at least 50%.

Objections to the draft Local Plan will only be considered if they relate to (a) legal and procedural compliance, (b) the duty to co-operate (for example with neighbouring authorities) or (c) soundness (has the plan been positively prepared, is it justified, effective and consistent with national policy?)

It is the view of the Edenfield Community Neighbourhood Forum (ECNF) and the Edenfield Village Residents Association (EVRA) that the draft Local Plan does not meet the soundness test for a number of reasons. ECNF and EVRA are, with professional advice, preparing a comprehensive response to the draft Local Plan which will be considered by the Inspector through an independent public examination before issuing a report to the Council.

The objections can be summarised as follows:

The draft Local Plan in respect of the proposal to release Green Belt land in Edenfield for development is unsound for a multitude of reasons including the following: –

WHAT CAN YOU DO?

It is important that ECNF and EVRA can demonstrate that their objections have wide popular support. If you support an objection to the Plan on the above grounds please confirm by either completing the objection form below. This must be done no later than 4th October. Please do this whether or not you intend to submit your own representations about the draft Local Plan. Every name will help further demonstrate the local support behind our objections. Please encourage every adult in your household to object.

Let’s all act to save the valuable and
irreplaceable Green Belt land in our village.

*I support the representations made by Edenfield Community Neighbourhood Forum and Edenfield Village Residents Association to the Rossendale Draft Local Plan August 2018. 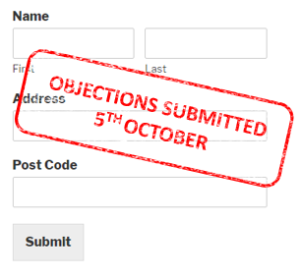 *If more than one adult at your address wishes to object, please complete the form once for each objector. If you’re sharing the form with friends online they may also visit a more concise version of the page here. If you’re having difficulties completing the form, please send us an email and we’ll help you if we can.

Signatories must be over 18 years of age. Your personal details will be held by the management committee of Edenfield Community Neighbourhood Forum and be shared with The Planning Inspector.  It will not be shared with any other third parties without your consent.