Yesterday’s Daily Mail published details from a report by the Council for the Protection of Rural England (CPRE). 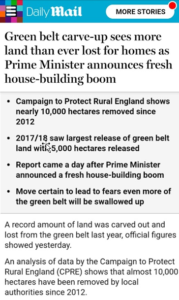 According to the report:

The CPRE report states that green belt land is the most profitable and desirable for developers due to it being ‘shovel ready’, surrounded by countryside and within commuting distance of major towns and cities.

The CPRE goes on to state that “There is currently enough brownfield land in England to accommodate more than a million homes, with almost three quarters of this in areas with green belt land.” The CPRE urged the Government and local authorities to ensure brownfield land is redeveloped before any more land is released from the green belt.

ECNF shares this opinion and has made this representation to RBC in response to their local plan.